The Chicano movement is an ultra nationalist movement, based on ethnic and mestizo racial nationalism, which seeks to gain political control of the southwestern United States and to ultimately join it with Mexico. They are the ideological heirs of the faction of Mexican nationalists, who worked with the German Kaiser in World War I and Hitler in World War II. These earlier Mexican nationalists were promised the territory of the American Southwest as a reward, if Mexico would join with the Germans in waging war against the US. As a nation, Mexico never accepted this deal, but pro-Nazi Mexican factions would have, along with a very large part of the Mexican public. 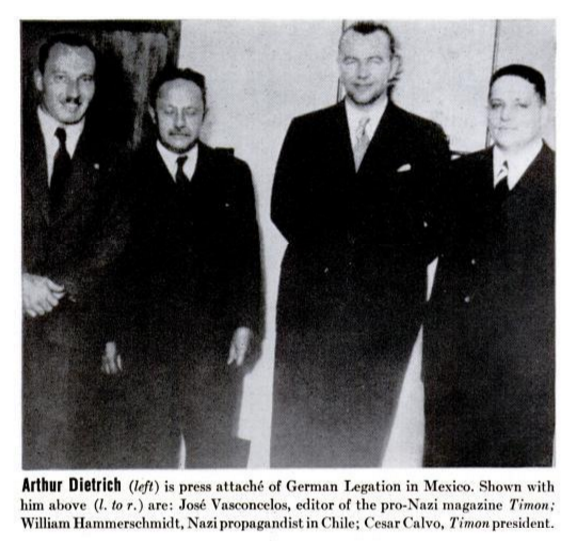 The term “La Raza” (The Race) was popularized by the book by Jose Vasconcelos, La Raza Cosmica (The Cosmic Race). La Raza Cosmica was a major source of inspiration for the Chicano movement, which began in the late 1960’s. This book is similar to the Nazi racial mythology translated to the Mexican historical, ethnic and cultural environment.

Vasconcelos was identified as the major Nazi propagandist and a member of the Nazi fifth column in Mexico by Life Magazine in their June 10, 1940 issue. He published and edited the journal, “Timon” (Rudder) in the early 1940’s, which was the most important propaganda organ for Nazism in Mexico and actually for all of Latin America. Below is a copy of the Life article in PDF format.

View this document on Scribd

This is the original source of the article. Scroll down to page 51 in this issue of Life to see the same story at Google books.

The “Aztlan” myth of the Chicano ultra nationalists is equivalent to Nazi-version of the myth of Atlantis, a home of a fallen race of Gods, who were destined to return to glory. The Chicanos identify the “lost” territories of the southwestern United States with “Aztlan”, though no one knows were Aztlan was or even if it ever really existed.

These two links are English translations of two articles originally written in Spanish.

This is part of a Mexican documentary, Nazis en Mexico, which mentions the work of Vasconcelos with the Arthur Dietrich at about 5:00. The subtitles are not playing on this blog.

The current La Raza/Chicano movement is a strange mix of Aztec neo-paganism and the ideologies of Nazism, Marxism and the indigenous movement. From the point of view of Marxists, Chicano nationalism can be considered to be a movement of national liberation. Marx wrote in his Communist Manifesto that communists will work with any revolutionary movement, which is also trying to overthrow the existing system, their common enemy.

The serpent-like creature in the photo below is Quetzalcoatl, the plumed serpent. Quetzalcoatl is the messiah-god of the Aztecs, who according to Aztec mythology will return in human form to restore the Golden Age. This is similar to how some occult groups predicted the rise of a “messiah” in Germany years before Adolf Hitler appeared on the scene. In the Chicano context, it would mean the Chicanos gaining control of what they call their “lost territories” or “Aztlan” in the American Southwest, not unlike the Nazis were trying to claim Lebensraum in Eastern Europe. 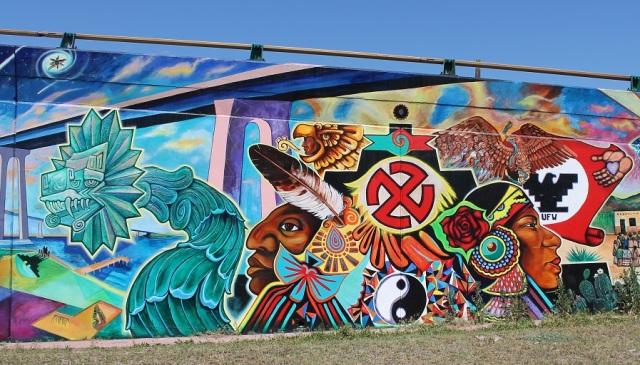 This is one visible example of Chicanos copying Nazi symbolism. The United Farm Workers is a Chicano / La Raza organization. The design was inspired by that of a historic Nazi battle flag. In the image below the two flags are compared. The Nazi swastika is simply replaced by a Mexican nationalist symbol, an eagle, resembling the Nazi eagle, the Reichsadler. After the resemblance to the historic Nazi flag began to be noticed, the design was slightly altered to make the similarities less obvious.

This is Chicano Graffiti at the site where Chicano Park is today with historically accurate Nazi swastikas. The photo is from the Vintage San Diego website and was made, just on year before the takeover of the area now called Chicano Park in San Diego, Ca. 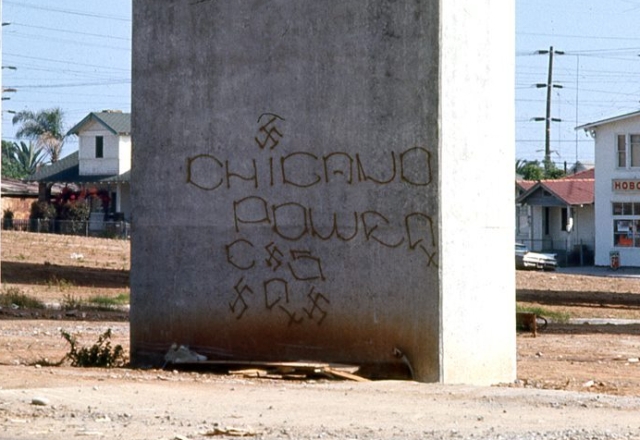 This is a local Chicano in San Diego, Lucky Morales, describing the meaning of “La Raza” supremacy doctrine, the mestizo (mixed) Race.

Here are a couple of books and a documentary film in Spanish about the Nazi fifth column in Mexico that discusses the involvement of Vasconcelos.

Like Loading...
This entry was posted in Chicano Nationalism, Chicano Park and tagged Jose Vasconcelos, La Raza. Bookmark the permalink.